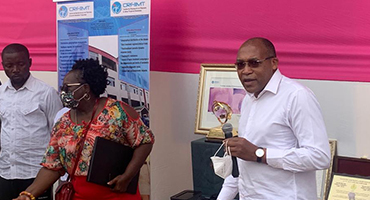 On Thursday, February 03, 2022, the Fondation Christophe et Rodolphe Mérieux announced the winner of the 2022 Christophe Mérieux Prize. This prize went to Professor Joseph KAMGNO to reward his exceptional career and research on neglected tropical diseases, especially filariasis, in Central Africa. The official award ceremony will take place on June 1, 2022 under the Dome of the Palace of the Institut de France in Paris.

Professor KAMGNO is a consultant and member of several committees at the World Health Organisation (WHO), Vice-President of the Onchocerciasis and Lymphatic Filariasis Elimination Committee of Cameroon, and Member of several Scientific Societies, including the Cameroon Academy of Science (CAS), African Academy of Science (AAS) and American Society of Tropical Medicine and Hygiene (ASTMH). He is the author and co-author of more than 150 scientific publications and books in the most renowned journals of the world. In 2015 he received the Islamic Development Bank Prize for his contribution to the economic and social development of Cameroon.